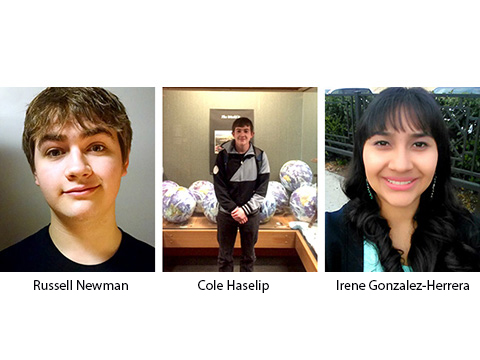 The Smullin Scholarship is having a positive impact on talented students from the local community. William B. Smullin, a pioneer of radio and television, established the Patricia D. & William B. Smullin Foundation to help provide educational opportunities for aspiring college students in northern California and Oregon. The Smullin Foundation has a long history of supporting students at Humboldt State—it’s given almost $1.4 million toward scholarships and internships since 1987.

Mr. Smullin believed in gender equity, diversity, free enterprise, and the value of higher education. The Smullin Scholarship is generally given to incoming freshmen and is renewable for 4 years. The scholarship provides $5,000 per year and aims to remove financial barriers for young, local students who embody a creative and innovative spirit.

With the financial support of the Smullin Scholarship, Russell Newman, Cole Haselip, and Irene Gonzalez-Herrera are now young scholars at HSU, making the most of their education. Here are their stories:

Russell Newman (’19) is from Hayfork, California. From a young age, Russell always wanted to attend HSU because of its strong science programs. “I’m glad I’m able to study here. Receiving the Smullin Scholarship has lifted a weight from my shoulders. I don’t have to worry about how I’ll afford a place to eat and sleep.”

Like many Smullin scholars, Russell is academically well-rounded. His primary focus is Marine Biology, but he also hopes to minor in Theatre Arts. Russell also took part in the Klamath Connection at HSU this year, a multidisciplinary program that studies the biological and cultural aspects of the Klamath River. As an aspiring marine biologist, Russell is deeply interested in studying whales and hopes to use his education to protect our oceans and rivers. He’s also ambitious--he’d like to establish an aquarium in the community someday.

Russell was inspired after meeting the daughter and grandson of William Smullin on campus last semester. “I know how helpful the scholarship was for me and other students. Meeting foundation board members Carol Anne Smullin Brown and Kevin Smullin made me realize that I’d like to create my own scholarship someday. A scholarship can make or break your future.”

Cole Haselip (‘19) is from Hydesville, California and has lived in Humboldt County his entire life. He’s focusing on Political Science and is currently enjoying classes in Comparative Politics and International Relations. Cole is watching the current election closely through the lens of his political science classes. As someone concerned about campaign finance and the influence of money on politics, Cole sees many similarities between this election cycle and the 1900s Populist Movement.

“Without this scholarship, I probably wouldn’t have been able to come to Humboldt State,” says Cole, who aspires to hold political office someday. He’s using the educational opportunity afforded by the Smullin Scholarship to pursue that goal. “I want to be in a position where I can communicate positive messages to people. I want to be a leader and bring people together to accomplish community goals.”

Irene Gonzalez-Herrera (’16) is a Psychology major from Fortuna, California. She’s currently finishing the last semester of her senior year. Irene’s goal is to help young people suffering from anxiety and depression. The path to this goal is through her education at HSU. Irene will be earning her bachelor's degree in Psychology this spring, and eventually wants to earn her Ph.D. She has already applied to HSU’s Psychology graduate program.

“As a first-generation college student, the Smullin Scholarship has eased my financial stress and allowed me the opportunity to volunteer and concentrate on my academic pursuits,” says Irene.

She has a particular interest in studying developmental psychopathology and hopes to one day teach at the college level. Irene looks forward to doing research that will help her develop interventions to improve the grades and social skills of children suffering from mental health issues. “I love the psychology field and I look forward to helping young people in my future career.”

Russell, Cole, and Irene are poised to do great things in their community. However, there are many more students who don’t have the financial resources to afford college. If you’re interested in creating opportunities for bright students like the ones you just read about, please click here to learn how you can help!