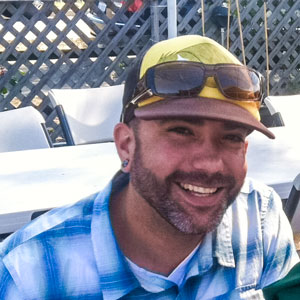 Jeffrey S. Navarro was known as a kindhearted mentor to many of his peers in the Environmental Resources Engineering (ERE) program at HSU. In the ERE department’s newsletter, fellow engineering students once wrote that Jeff was always willing to put down his own work to help anyone with a question or problem. He was always asking “What can I do? How can I help? Do you need anything?”

Jeff achieved his goal of graduating from HSU’s ERE program in December 2014. Sadly, on January 15, 2015, he passed away after graduation in Arcata, a place that Jeff had come to consider his home. His loss was a blow to the tight-knit engineering community at Humboldt State.

In his memory, the Navarro family has established the Jeffrey S. Navarro Mentorship Program with a generous donation. They hope it will encourage and nurture Jeff’s qualities in other ERE students through mentorship and collaboration.

The Navarros worked closely with ERE Department Chair and Professor Beth Eschenbach and other ERE faculty to make the mentorship program—which captures the essence of Jeff— a reality in Fall 2015. “Jeff had an aura about him that pulled people into his sphere of existence. He looked to the better nature in people, and was the most loyal, trustworthy person you could hope to know. We wanted his qualities to live on through the mentorship program,” says Jeff’s father, Rene Navarro.

Jeff had an unshakable determination. He came to HSU with a focus in sustainable energy, and found the challenging ERE program wasn’t easy. Jeff, at times, faced daunting academic circumstances that required him to repeat some classes. But Jeff was not deterred. With an indomitable spirit of perseverance, he engaged with ERE professors and Eschenbach, and through their discussions, guidance, and mentoring he was able to succeed in achieving his goal of graduating.

The mentorship program is an attempt to recreate the mentoring relationship between student and faculty, which forms the crucible of influence for student success. The program encourages qualified ERE students to assume the roles of mentors, with the goal of helping all ERE students graduate and develop into engineering professionals.

ERE students chosen for the program are awarded a stipend for helping other ERE students succeed through interaction, discussion, and mentoring.

Jeff not only worked hard for his own success, but he also inspired success in those around him. That’s why the program honors his memory by encouraging ERE student mentors to share their learned experiences, and to use his example to inspire their peers.

“The program has two goals,” explains Rene. “One goal is to keep Jeff’s story alive. And the second is to perpetuate Jeff’s goodness in the world—to create a lasting legacy that helps others adopt the altruistic qualities that Jeff so generously displayed in life.”

The mentorship initially began with a gift of $3,000 from the Navarro family to fund one mentor for one year. Now, heading into the next academic year, the program has grown, with three new mentors selected to accommodate growing interest in the program. Over 50 students have applied to receive mentoring help through the program.

Since it began, the program has been a great resource for students and a valuable experience for mentors.

Mentor Jax Gill described it in the ERE department’s Spring 2016 newsletter: “Mentoring has proved to me that we all have hard days and deal with stress. Yet, with perseverance, and a community to share the load, we can all thrive through our studies to become engineering leaders of tomorrow.”

Fellow mentor Jason McMack also had powerful words about his experience, writing: “I chose this opportunity to help people, and in that process I have learned more about myself than I could have hoped for.”

If you’re interested in helping Jeff’s legacy of altruism live on to benefit future students, you can make a contribution to the Jeffrey S. Navarro Mentorship Program. Your gift will be used to support mentorship activities for ERE students. If you have questions about supporting the Jeffrey S. Navarro Mentorship program or HSU, please contact the Office of Philanthropy at giving@humboldt.edu or (707) 826-5200.