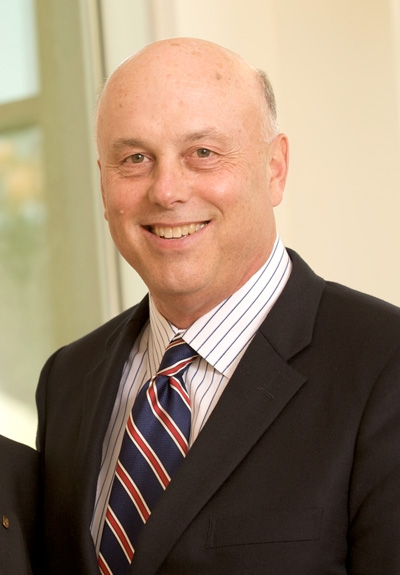 Humboldt State has been a part of Burt Nordstrom’s life since he was a kid.

He remembers riding his bike to campus to play in the old field house, and occasionally to sneak into the gym for some pick-up basketball. He later chose Humboldt for college.

Despite a tough start that included failing his first writing assignment as a freshman, he thrived as a student, got involved in campus life and student government, and earned his degree. He also enjoyed great success in football and baseball at HSU. He went on to play two years of minor league baseball, and in 1998 was inducted into the University’s Athletics Hall of Fame.

But all of that was just the beginning. After graduating, he went to work with University Center, and ended up spending four decades in various roles at HSU. At UC, he eventually became executive director. Then in 2004, he was tapped to serve as HSU’s Vice President for Advancement, and he helped create HSU’s Advancement Foundation. After “retiring” he returned to serve as Vice President for Administrative Affairs, providing valuable leadership during the challenges of the recession and budget cuts to higher education.

“I received an outstanding education, and had a great experience as a student,” Nordstrom says. “Then I was able to spend my career at HSU doing all the things I enjoyed, and at a place I care about. That is something I will always appreciate.”

Nordstrom has had a hand in countless projects across campus – including the Rec Center, the clock tower, the Library Café, Humboldt Bay Aquatic Center, College Creek Marketplace, numerous classroom upgrades, and significant expansion of the University Center. His focus, he says, always remained on improving the quality of the student experience. When he retired, the University Senate recognized him with a resolution that read in part: “HSU has been blessed to have a person of Burt’s caliber and dedication.”

Always a fan of Lumberjack athletics, Nordstrom continues to volunteer as a radio commentator on the local ESPN affiliate during broadcasts of Lumberjack football games, a role he has relished for more than 25 years. He says he’s proud to give his time to a place that’s been such a big part of his life.